Gartneriet Thoruplund nursery was founded in 1946 by Sigurd Andersen, who started out producing vegetables outdoors. He later moved on from vegetables to cut flower production.

His son, Jørgen K. Andersen, took over the nursery in 1974 and began potted plant production of Schlumbergera, Campanula and Rhipsalidopsis in a production area of around 3,000 m2. These cultures are still the nursery’s main types.

The nursery production area has grown since then to 45,000 m2 of greenhouses which was increased from 1 January 2012 by 17,000 m2 through the multi-year lease of the Dania nursery. We at Gartneriet Thoruplund have, over the years, worked intensely on the development of our main cultures. Today the majority of the genetics used in production have been developed by us in-house. These are marketed under the brands Campanula ‘Blue Ocean’® and Thor-Cactus®. The focus in this development is quality, shelf life and new colours. For the past 5 years, we have produced Rosa Infinity®, where the quantities per. years are increasing.

In 2006, Jørgen’s children, the twins Bodil and Jacob, came home to the nursery, both of which were co-owners. In 2012, there was another generational change when Bodil and Jacob took over as the 3rd generation. Bodil with responsibility for administration and sales and Jacob for production. 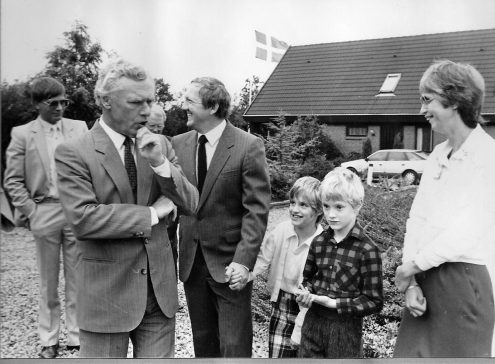 Pictures of Thoruplund and the many experiences

These pictures are of different events from Gartneriet Thoruplund’s history presented in no particular sequence. There are pictures of Poul Schlüter who visited the nursery while he was Prime Minister and there are pictures from national and international exhibitions we have participated in.

There have been fires at the nursery, buildings have been both built and demolished and coal-fired heating and later combined heat and power have been installed. The twins have grown up and spent their time in the nursery and are fortunately still here.

Scroll to top
We use cookies on our website to give you the most relevant experience by remembering your preferences and repeat visits. By clicking “Accept All”, you consent to the use of ALL the cookies. However, you may visit "Cookie Settings" to provide a controlled consent.Cookie Settings
Cookie SettingsAcceptAccept All
Manage consent

This website uses cookies to improve your experience while you navigate through the website. Out of these, the cookies that are categorized as necessary are stored on your browser as they are essential for the working of basic functionalities of the website. We also use third-party cookies that help us analyze and understand how you use this website. These cookies will be stored in your browser only with your consent. You also have the option to opt-out of these cookies. But opting out of some of these cookies may affect your browsing experience.